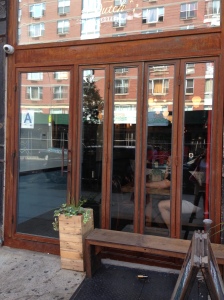 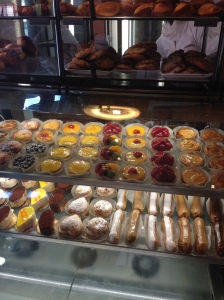 I was recently in New York in Harlem. There has been quite a revitalization going on.   Perhaps I should call it an over “gentrification.” I am not sure what to think of it. There has been a huge change. It is no longer the gritty, soulful place it used to be. The Apollo still stands strong on 125th, and the Red Rooster crows loudly on Frederick Douglass Boulevard, where enough means buys you a splendid Sunday gospel brunch, with fried chicken, collard greens and macaroni pie.

Located in the northern section of NYC, Harlem is known as a major African-American residential, cultural and business center. It is also home to Africans from around the continent of Africa and one hears French and Portuguese frequently on the streets there.

It’s interesting that Harlem’s black population was at its highest in the 1950s.   However, in 2008 for the first time, the Census reported that it switched; blacks now holding only a 4 to 10 ratio.

Standing on Frederick Douglass Boulevard, I thought of its namesake, Frederick Douglass, born Frederick Augustus Washington Baily. A man who distinguished himself as a speaker and statesman; a great leader of the abolitionist movement in the United States.

A man who wrote on his arrival in Harlem:

“I have often been asked, how I felt when first I found myself on free soil. And my readers may share the same curiosity. There is scarcely anything in my experience about which I could not give a more satisfactory answer. A new world had opened upon me. If life is more than breath, and the ‘quick round of blood,’ I lived more in one day than in a year of my slave life. It was a time of joyous excitement which words can but tamely describe. In a letter written to a friend soon after reaching New York, I said: ‘I felt as one might feel upon escape from a den of hungry lions.’ Anguish and grief, like darkness and rain, may be depicted; but gladness and joy, like the rainbow, defy the skill of pen or pencil.”

And who later wrote, once he left American soil for the first time:

“Eleven days and a half gone and I have crossed three thousand miles of the perilous deep. Instead of a democratic government, I am under a monarchical government. Instead of the bright, blue sky of America, I am covered with the soft, grey fog of the Emerald Isle [Ireland]. I breathe, and lo! the chattel [slave] becomes a man. I gaze around in vain for one who will question my equal humanity, claim me as his slave, or offer me an insult. I employ a cab—I am seated beside white people—I reach the hotel—I enter the same door—I am shown into the same parlour—I dine at the same table—and no one is offended… I find myself regarded and treated at every turn with the kindness and deference paid to white people. When I go to church, I am met by no upturned nose and scornful lip to tell me, ‘We don’t allow niggers in here!'” – from My Bondage and My Freedom.

As I walked slowly down this wide, busy, boulevard in South Harlem, from the Double Dutch a new high-end coffee shop to get a Cappuccino, and then next-door to get an almond croissant at the Patisserie Des Ambassades’, I wished Mr. Douglass would magically appear by my side. Oh, what might he say? 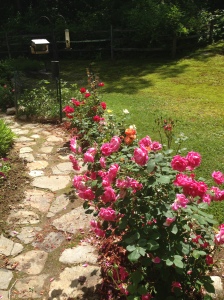 By that sweet ornament which truth doth give!

The rose looks fair, but fairer we it deem

For that sweet odour which doth in it live.

The canker-blooms have full as deep a dye

As the perfumed tincture of the roses,

Hang on such thorns and play as wantonly

But, for their virtue only is their show,

Die to themselves. Sweet roses do not so;

Of their sweet deaths are sweetest odours made:

And so of you, beauteous and lovely youth,

When that shall fade, my verse distills your truth.

This morning working with my roses I was reminded how much I love them.  With care and tending they give back so much.  And every now and then they prick your finger, reminding you that life is short, and full of those moments when beauty mixes with pain.

I am always amazed when I come to the big apple.

I am here in New York, sitting on the subway and looking at the array of tired working poor heading into the city from the Bronx, Queens or Harlem, the tourists, the Wall Street guys.   My eyes vaguely take in an ad for “Bark a Box”, and I realize with a start that it’s a delivery service of goodies for dogs “tell us how big your dog’s bark is. we’ve got goodies for every dog size.”

Sitting underneath the ad there are a couple of good looking middle-aged French tourists. The woman is wearing a skirt the size of a hankie, and the man has his hand resting halfway up her thigh. The guy next to me lifts his eyes from the Wall Street Journal he is reading from time to time, to take in the brief glimpse of her underpants that she flashes at him as she crosses and recrosses her legs.

Once we get where we are going, Tribeca, we head towards a day care center that costs $4,000 a month.   We find it is a wonderful and magical place where children run around like brightly colored birds on amphetines.   We are treated to an hour of child development 101. As I drift in an out of this lengthy technical presentation, I glance at our fellow listeners; a couple of gay men, a slender black woman with a designer purse who looks like a model, and a Caroline Kennedy look alike, with a blue dress, matching blue purse, blue wellington boots and a diamond the size of a small island on her hand.   It ‘s the kind of place where parents should love to put their children, but we decide the baby is too small, and we flee before we have to pay the $100.00 registration fee.

It ‘s explained during the course of our tour that this center will make sure that your child passes the gauntlet of interviews it will have to take, in order to enter the top-rated kindergartens that surround us. Apparently it’s so competitive to get in, these children will need extensive portfolios by the time they are five. These include Jackson Pollock imitations and certificates to say that they have learned block building skills from an expert with a Phd. The principal of the school tells us that this skill guarantees potential advanced math abilities for the child in the future.

After that we walk around Soho, and stop in at Warby Parker. At one point we sit on the cobbled street surrounded by Dior, Channel and many other smaller designer stores. Fashionable people pass us. Slender older women with just the right outfits, gay men with large dogs, famous rock stars and atheletes. My daughter points one out to me, and says he has “g” status. I ask what that means, and she says “gangsta” status.

The footwear is amazing and deserves a piece all to itself. Finally we buy the baby a hat in Giggle. It’s only eighteen dollars and it makes a bold fashion statement. Our day is made complete when a crazy Russian immigrant sits next to us on a bench in Washington Square and asks me if I hate Spanish people. Needless to say, we hastily move on to buy an iced coffee, visit Duane Reede and head home.